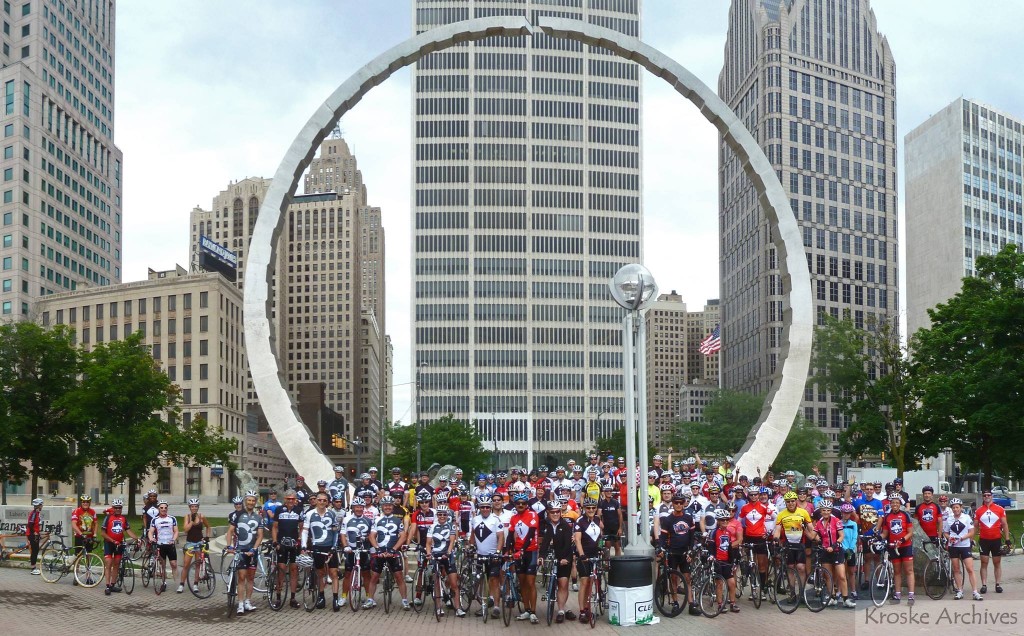 The Fifth Annual Woodward Loop Ride brought together the largest number of riders ever for this event since its 2009 inception which was the 100th Anniversary of Woodward Avenue being paved.  A total of 170 riders participated in the Loop ride.  90 of the riders started out from Biggby Coffee in Birmingham on Old Woodward & Maple at 7:30 and headed out on the “first” start, riding north to Pontiac and around Wide Track Drive, also referred to as the “Loop.”  Thanks to Kristen J. for her directions around a couple of minor road issues near the tracks south of Downtown Pontiac. Everyone made the north climb of 350 feet without incident and managed an average speed of 18 mph.  On the route back south, the ride leader opened the gates and most of the riders took up the relatively downhill course back to Birmingham on the nearly car-less Woodward at speeds of 28 mph and faster.

Arriving in Birmingham prior to 8:30 and having traveled about 17 miles with 500 feet of climbing, the first wave of riders were greeted by an additional 80 riders who were planning on the trip to Detroit and a view of the Detroit River. Despite construction on Woodward from 14 Mile to Webster where we were riding on one of the two open lanes, not one automobile passed us in the construction zone!  From there it was clear sailing to Detroit.  The roads were smooth, traffic nominal, and several riders, including David Hicken and Ron Rich, facilitated ride leadership to pace the riders to Detroit.  Passing Palmer Park, strollers in short skirts waved hello and many pedestrians and those sitting on the curb cheered us on!  We passed Albert Kahn-designed buildings and headed past Comerica Park without having to detour as we did last year. On to Hart plaza. Russ St. John brought a group of riders from Grosse Pointe to join in and we had a huge group in front of the “Broken Rim” sculpture at Hart Plaza and a nifty photo opportunity.  Scott Kroske took some great photos as did many other riders.  Danny Klein commented, “Man this is a fun ride!” Mark Cahn could not let go of a smile all morning.

From there, about 40 riders split off for a fast tour of Belle Isle and most did two laps.  The bulk of the riders headed north on Woodward where we turned west onto Adams then north again onto Cass.  We rode north toward Wayne State University and stopped at Avalon Bakery for a trail cookie or other snack.  The ride delineated itself with several groups and paces upon the return.  Everyone sat in and the routing was back up Third to Chicago Blvd., across to Hamilton and north to Palmer Park near the Detroit Golf Club.  Our group took 7 Mile to Warrington and north, working our way to Livernois. Despite a bit of construction at 9 Mile, we continued through pleasant Pleasant Ridge.  We took Drayton west which becomes Oak Park Blvd. to Manistee, then north to Northfield and west to Scotia.  Leaving Oak Park we rode through Huntington Woods and onto Beverly Hills and to Birmingham.  The final mileage count was 56.4 miles with 900 feet of climbing.  It is a bit up hill from the Detroit River it seems!

Michigan Youth Cycling gained well over $1000.00 on the generosity of the riders, and special thanks goes out to Joe, Rose, Biancha, and the staff of Biggby Coffee for supporting our ride, tolerating our sweaty jerseys and for again making a generous contribution to MYC!

For those of you who would like to contribute you can do so in cash or check to me and I’ll deliver it to MYC or go to the website:  www.MichiganYouthCycling.org and you can do so by mailing in a check or go online.

Thanks to all the o2/CBC riders who came out and supported this fun event.  Racers and casual riders sharing the route that links the communities along Woodward Avenue like “pearls on a string” reinforces the idea that we are all members of one large community – and that a bike friendly community is a friendly community.