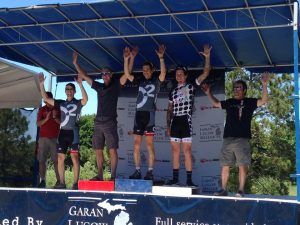 The 45+ group produced great results at the 2013 Cherry Roubaix Road Race. The course is 23.3 miles per lap with the masters race completing 3 laps. The start-summit finish line is high atop Sugar Loaf Mt.  I thought I would share what I observed during the race that gave O2 the victory.

It was decided during a pre-race meeting that Mike Dega was going to be the aggressor, a roll that the Team agreed could lead to a stage victory.  Dega committed himself to a roll of extreme effort that would lead to victory – or an all-out bonk.  No rest, no draft, just mental and physical pain.

The race took off with a more relaxed pace, but of course, Team Hagerty sent a “flyer” off the front to create a break.  The field did not react, letting the rider ride solo within view.  I moved myself to fourth position watching for any moves from Craig Webb of Team Hagerty or Tom Linck of Leadout Racing, who Mark Cahn and I thought were the two strongest riders in the field.

At about the halfway mark into the lap, Dega and a second rider made their move to bridge to the leader.  I was extremely happy to see that the peloton let Dega go and that he was able to drive the break out of our site.  This was an aggressive move that required guts and an all-out commitment for victory.

At this point our team plan was running according to script.

Cahn and I were doing everything we could to slow the peloton.  C. Webb seemed to be content with his teammate working with Dega in the break, however T. Linck, and Newton Cole, a new rider with Burnham Racing from Chicago, were growing uneasy.  They began trying to increase the speed of the peloton; however the rolling hills made it tough to get anything organized.

A rotation did form, so I put myself into 5th position making it difficult for a large number of riders to participate.  At this point C. Webb was still content sitting in, while T. Linck was expending a lot of energy pushing the 4 rider rotation.

Half way into the lap, the rotation began to break up and the peloton slowed.  At this point, N.Cole decided to make a strong move to bridge to Dega’s group.  M. Cahn anticipated the move and latched onto Cole’s wheel.  While the peloton was still recovering, N. Cole and M. Cahn met up with Dega to create a five rider break out of the peloton’s site.

At this point, I thought “Checkmate”, but C. Webb and T. Linck had other ideas.

At the beginning of lap three, I could tell Webb was getting nervous. The break was still out of the site and he only had one team member against two O2 team members.  He shouted out to his supporters on the side line for the time gap.  It was more than two minutes.

Then the fireworks began.  On the next few hills, Webb destroyed the peloton with some hard attacks.  After catching his wheel, I looked back and all we had was T. Linck.  Webb and Linck began their rotation, while I grabbed wheel.  (Being experienced bike racers, both of them knew I had no interest in contributing to the effort, since my teammates were in the break.)

Three quarters into the lap we looked ahead and Webb saw his teammate was dropped from the break with only a short distance to the finish.  Alarmed, Webb began asking everyone he could for the breaks location.  On the course’s second-from-the-last major climb, Webb was told that the gap was only 29 seconds.

I moved ahead of Linck and Webb during the climb, since I noticed that they were feeling the effects of their efforts.  (This was where I made a big mistake and corrected it quickly.)  Looking at the pain in Linck’s face I got soft and told Webb “If you catch the break, I’ll give you the win… just don’t make me look bad”.  WOW… What did I just do???  I’ve done this in the past??? If Cahn finds out, I’m toast!  I quickly slowed on the hill and told Webb,” I need to race for the win… game on”.  He smiled.

On top of the climb, Webb and I distanced ourselves away from Linck.  Webb attacked on the decent, and that’s when I looked up and saw Dega, Cahn and Cole.  CRAP!!!  We were coming hard and Webb had new life.  When we caught the group, Webb slowed, Linck was able to hook on, and I moved to the front.

At the front, going into the last climb to the finish line, I looked into the eyes of Cole and said “you’re going to be a problem aren’t you”. He smiled.  Not knowing how my teammates were feeling, I increased the tempo during the first of the two stage climb.  I looked back and saw Cole trying to close the small gap I created.  At the crest of the first stage, I increased my tempo again and noticed that I was not going be caught.

Knowing that my daughter, Eva, was watching at the finish, I threw in some theatrics by pumping my fist.  She thought it was great, my wife rolled her eyes, and I just smiled, since Team O2 just executed another strong team finish and victory.