We had a solid showing at the Island Lake mountain bike race this past sunday. With a race roster of Joshua Hall, Nate Benke, Phil Huyghe, Erik Huyghe, Jake Samborski, Melissa Seymore, Mark Boden, and myself, I think it is safe to say this was one of the best turnouts O2 has had at an MTB race. Not to mention we had Mike Dega, Chris Wanely, and Mary Raftery show up as part of the support squad. The O2 tent was set up in prime location and my better half Becky helped me cart our grill out to make sure every one was fed after the race.

As for the racing, there was some good, some bad, and tons of exciting. Josh took 4th place with Nate in 6th in the Men’s Expert 30-39 race. This is a tough field and Josh’s second Expert class race. After listening to him worry about making the jump to Expert all winter, I think we can put the speculation to rest, the man is fast! Nate’s 6th place finish was also a strong result, especially in a field with the likes of Jeremy Merz and Eric Langley.

Jake Samborski originally came to hang out and support the team, just getting cleared from a broken bone in his foot that has had him off the bike for the past month. At the last minute he decided to register and race in the single speed class. Unfortunately for him, he blew his tire at the start and fell down. To make matters worse, the racer behind him ran over his head! Jake stayed and hung out for the rest of the day, collecting 4 stitches above his eyebrow on the way home.

Mark Boden, the Huyghe’s and I raced sport class in our respective age groups. I took 5th in the 19-29 race, I feel like I could have contented with the lead group but the race for the podium ended in the first two miles. One particular racer decided to actively and aggressively block any passing attempts in the first 2 miles of single track… his attempts proved fruitless because we were eventually able to pass and he ended up in last place. These antics gave the lead group of four a hefty gap on the rest of the field. I tried my best to chase them down, not knowing how many people were even in front of me. I’ll take the top 5 result with a smile given the circumstance. Erik Huyghe took 7th in the 30-34 race. I don’t know how Mark and Phil did because the results still haven’t been posted online but I know they gave it their all in field that is generally known for being large and competitive.

One big highlight of the day was Melissa Seymore in the women’s sport 19-39 race. New to mountain biking she was debating racing beginner or sport. She decided on sport… and ended up taking 1st place. Way to go Melissa! With good results in cyclocross, road, and now MTB, she is proving to be quite the asset to any division of our team.

After the race we all hung out and grilled some food and drank some ice cold beers, all generously provided by O2. So if any of you Island Lake racers or hanger-outers see Mark Cahn or any other board members, be sure to extend a thank you for giving the MTB team a budget this year. I want to extend a thank you of my own to anyone who came out on Sunday. Getting good showings like this is exactly what I want to accomplish as MTB race captain. If you missed the race/party I plan on doing something similar at the Addison Oaks race in the fall.

Keep the rubber side down, 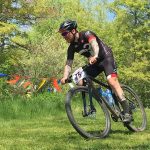 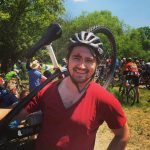 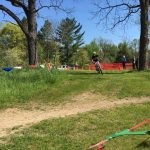 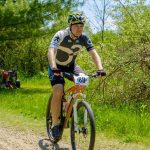 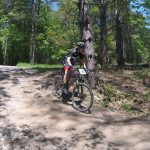