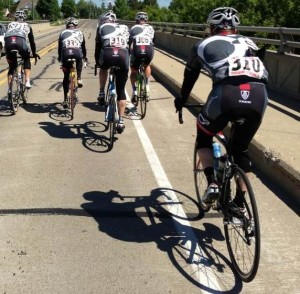 Cooling down post race with the entire crew (Doug is not pictured since someone had to take the photo).

For the Tour of Frankenmuth, the CAT 3 team brought six racers (Derek Delzer, Chris Matthews, Doug Burcicki, Jerry Gase, Brian Wachlarz and myself [Paul Skorupskas]) to the start line to be one of the largest teams – if not the largest team – represented in the field. This group added three racers to the mix compared to those that represented the team at Cone-Azalia included our newest addition to the racing club in Brian Wachlarz.

Having such a large presence in the race meant that we would be on the attack throughout. This gave us two distinct advantages in that we didn’t have to worry about chasing down any groups off the front since we tried to always be represented in the breakaway groups and it let some of us rest up for later in the race while everyone else was busy chasing down the attacking moves.

The race started with Brian immediately jumping out front and forcing the group to start chasing immediately. Anyone that has ever raced with or against Brian knows that this is typical of his aggressive and team-oriented racing style. The first lap was filled with moves being made by us and other teams, and we did a very good job of ensuring that all moves were covered very well. Doug, Jerry, Brian, and Chris certainly made our presence known in the first half (plus) of the race. You know you’re doing your job when you hear comments from other racers in the group like: “that move doesn’t have a chance – [Team] O2 isn’t in there”.

Midway through the first lap, there was a hiccup with a marshall not being present at one of the key turns, causing most of the peloton to have to regroup and turn around to eventually get back on course. It seems that this happened in more races than simply ours, but was corrected on the further laps. The real pitfall with missing this turn is that it caused us to mix with 35+ field. Fortunately after 2 laps of us passing in and out of the 35+ field, a few crafty racers assembled our field and we as a race group agreed to neutralize ourselves for 3-4 mins giving our race enough of a gap with the 35+ race group so that both races could finish alone in their respective final laps. It was great to see a lot of people on different teams work together to self correct and neutralize the group to allow for a good finish to the race… and what a finish it turned out to be.

The entire race was a battle of little moves trying to get away, but on a pancake flat course with no wind and several determined teams, everything was getting pulled back before much of a break could ever materialize. That was until an unattached rider began to creep off the front about 6-7 miles from the finish. At first it didn’t look like much, but before long, in what turned out to be a very cunning move, a racer stealthily created about a 15 sec gap for himself and it was looking like he might have some staying power. At this point I wanted in at a chance to get away and join him up front. I was in good position in about 10th wheel to put in a little attack and work on bridging up to him. Before long I had cut his lead in half and was looking good, but a quick look back and I realized that I was bringing quite a few others with me, luckily including Derek Delzer. I made a decision to ease up and right on queue Derek jumped and made short work of the remaining gap solo while I, and my chase group, slowed. The peloton caught us, but now we had Derek with another strong rider off the front in perfect position to stay away. Derek and the unknown rider were able to stay away until just before the final turn, but long enough to put Derek in perfect position in the turn. With the group together going into the final turn, Derek was able to sprint for second. I worked to get 5th position in the final corner and settled for 6th at the line. The rest of the team also had strong results (see below) especially after the work that was done earlier in the race.